Mr Daniel Lee and the family of Mr John Leeming gave more than £5,000 toward the cost of construction and furnishing.  Both benefactors had become prosperous in the textile trades in Manchester and Salford; they are commemorated in chantries at the liturgical east end of the choir. The Cathedral’s “east” window of 1851 was a gift of Bishop William Turner, first Bishop of Salford, it is by William Wailes of Newcastle, it depicts Our Lady, numerous saints of significance to England, the Holy Sacrifice of the Mass, the Last Judgement and the history of Catholic Christianity in England, from the conversion of Ethelbert by St. Augustine in 597, to the restoration of the Catholic hierarchy in 1850. The total cost of building the Cathedral was £18,000. 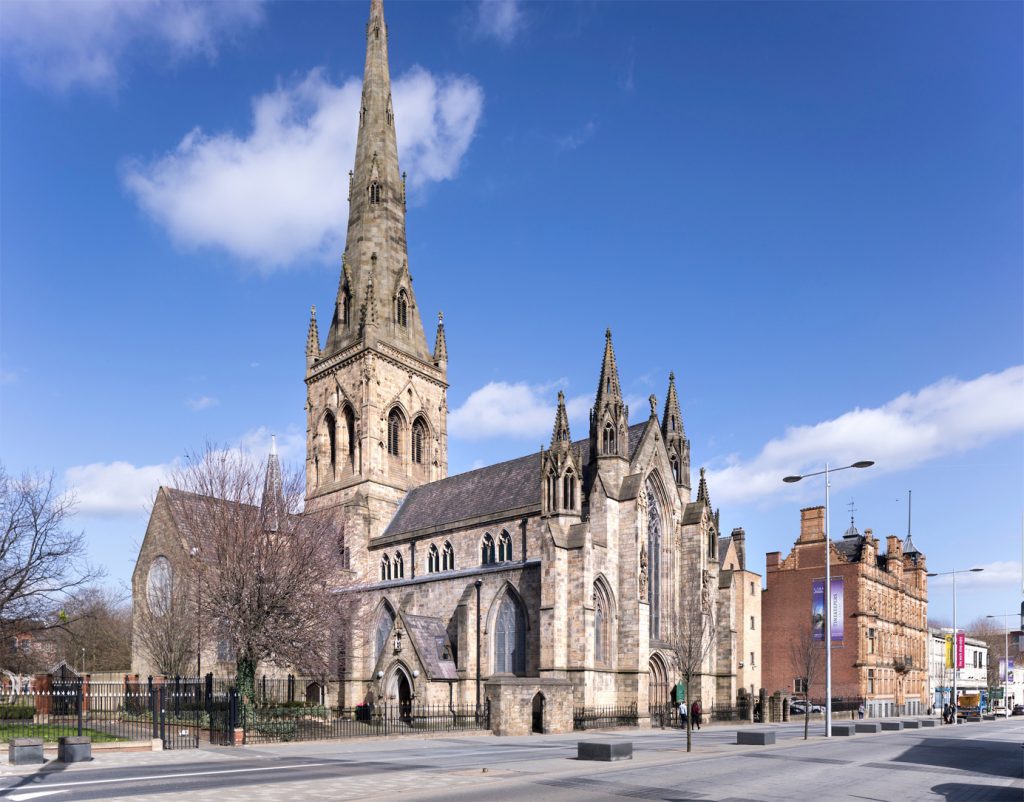 The foundation stone was laid in 1844 by Bishop James Sharples, coadjutor to Bishop George Brown, Vicar Apostolic of the Lancashire District. The church was opened on 9 August 1848: Bishop Brown celebrated a Solemn High Mass and Bishop (later Cardinal) Nicholas Wiseman gave the sermon in the presence of the Bishops of the other Vicariates of England and Wales. St. John’s was elevated to cathedral status and William Turner was consecrated the first Bishop of Salford on 25th July 1851 following the erection in September 1850 of the Diocese of Salford, becoming one of the first four Catholic cathedrals in England and Wales since the English Reformation.[2] In the same ceremony the Rector of St. John’s, Dr George Errington was consecrated first Bishop of Plymouth.

Thirty years later in October 1881 a violent storm caused serious damage to the Cathedral’s 240-foot (73.2 m) spire. Canon Beesley, then the administrator, succeeded in raising funds for repairs to the spire and generally refurbishing the fabric of the building. He also oversaw the furnishing of the new chapel of the Blessed Sacrament in the ‘south’ transept in 1884, to designs of Peter Paul Pugin, third son of A.W.N. Pugin, the painted decoration was undertaken by Joseph Aloysius Pippet. 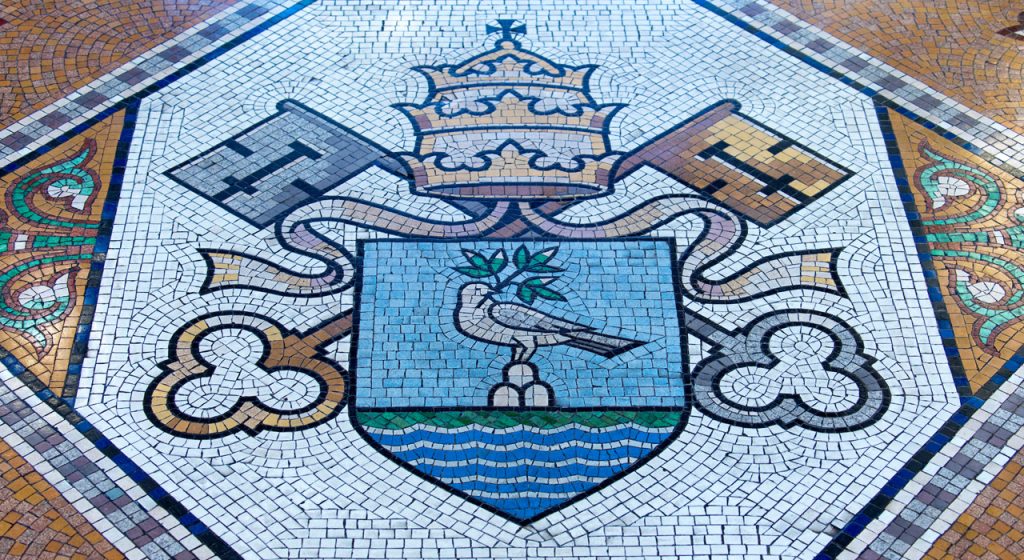 By early 1890 the last £1,000 was paid to settle the original debt for the building of the Cathedral, which led to the consecration of the Cathedral in the same year by the second Bishop of Salford, Herbert Vaughan, later to become Cardinal Archbishop of Westminster.

In 1919–20 the turrets on the “west” front were found to be in danger of collapsing into the street below. They were taken down and rebuilt by the Sheffield firm of O’Neill & Son under the direction of Charles M. Hadfield, grandson of the Cathedral’s original architect. In 1923 the War Memorial Chapel in the “north” transept was opened, commemorating the fallen in World War I. By 1934 the Cathedral’s spire was found to have strayed from the perpendicular and the Civic authorities ordered that some sixty feet be removed. Repairs were not completed until 1938. Restoration and repair of damage sustained in the Second World War was carried out in the immediate post-war years including restoration of the extensive mosaic floor of the choir and chancel originally by Minton. 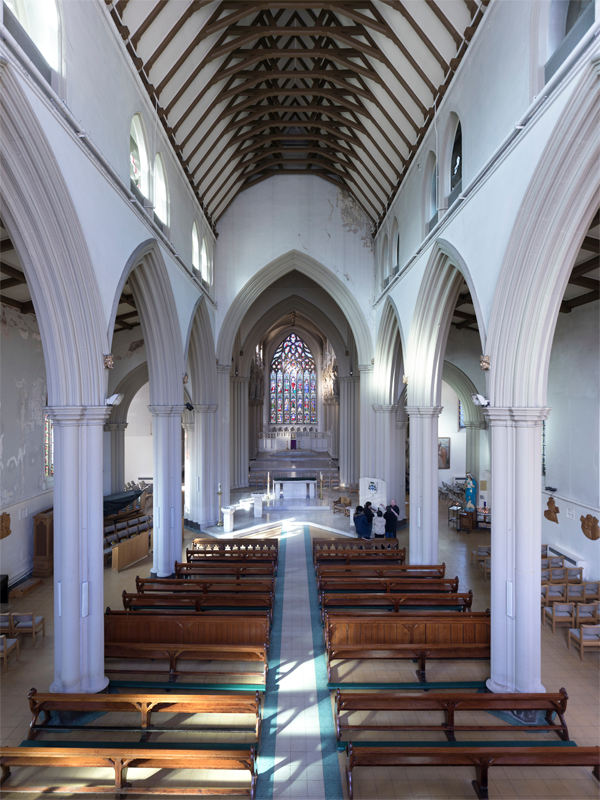 Further restoration and re-ordering were carried out in 1971–72 at a cost of £80,000. This included the erection of a new free-standing altar located under the crossing, following the Second Vatican Council. A further re-ordering of the choir and chancel took place in 1988, including the removal of the original stone High Altar and Reredos, installed in 1853-55 to designs by George Goldie.

A new stained-glass west window was installed in 1994, to commemorate the 150th anniversary of the laying of the Cathedral’s foundation stone. Its title is When I am lifted up I shall draw all to myself, and it depicts, in somewhat abstract form, the crucified Christ flanked by the Virgin Mary and the Cathedral’s patron, St. John.

Restoration of the external stonework to the spire and ‘west’ (i.e. south) front took place in the spring of 2007.

On Saturday 6 July 2019, Bishop John Arnold unveiled the new north entrance and piazza. The new entrance, which is just one element of a major restoration and repair project at the Cathedral. The west door will replace the North Door as the main entrance to the Cathedral. 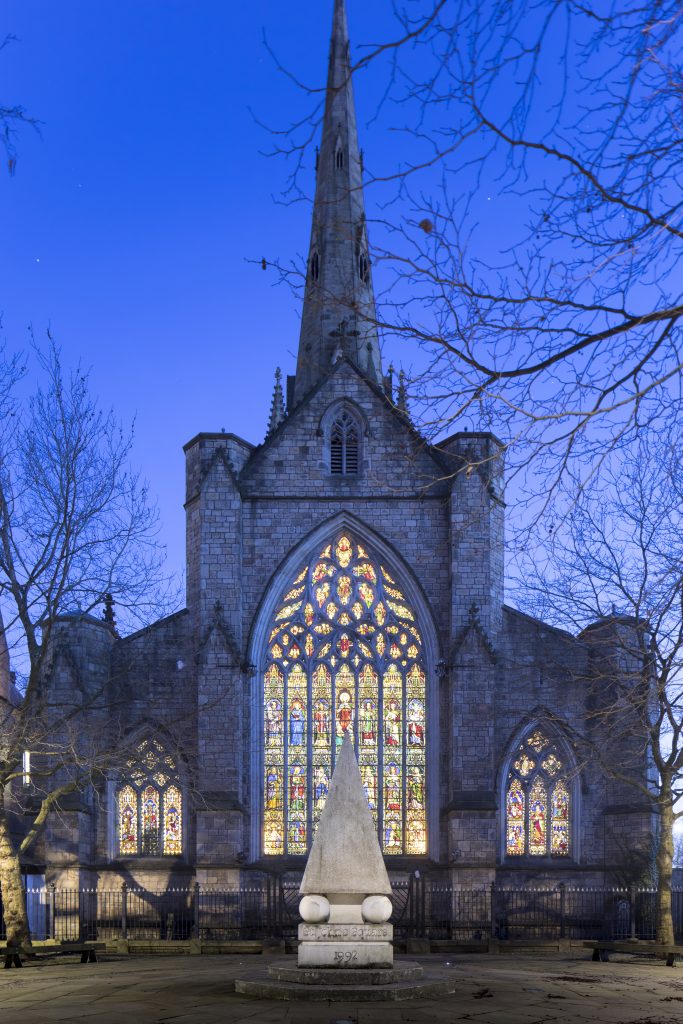